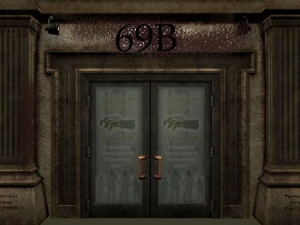 Moira was waiting for Colleen at the bottom of the steps. Colleen could hear her multiple dogs barking in the apartment behind her. No one was sure how many dogs she had, only that she had more than should be legally allowed in a building. “Good evening Moira.” She said. God she hated that woman.

“Good evening dear.” Her voice was paper thin. “Taking out the trash before the morning?” She said.

With two bags of garbage in her hand, Colleen thought the answer to that was pretty obvious. “Yes, Ma’am.” She said.

Colleen reminded herself that the old were lonely and loved to talk to people. “Yes.” She said. “It’s getting dark a lot earlier now.”

“How is Blaine doing? Is he happy with his new work?” The dogs barked shrilly behind her. Moira didn’t pay them any mind.

“He’s happy.” Collen said. “He just landed another design job.” Colleen knew that he was over the moon about the job as it meant he could stay home all day and do what he loved. She envied him for it, even if she hated him for it at the same time. He was always at his computer, tinkering. She would read and the evenings would pass in silence. She supposed she loved him, if she even knew what love was, really. Did anyone?

Like this dried up old husk here, Colleen thought. A woman with so many fucking dogs that she doesn’t realize she smelled like shit-didn’t she know she fucking stank? Sighing, Colleen moved down the steps and passed Moyra without trying to sniff too much. She breathed in through her mouth. As she reached the front door, Moyra held her hand out to her. “Be careful out there, dear.” She said. “It is a very cold night outside.”

Later, as her blood was spilling onto the ground, Colleen wondered if the batty old bitch had made some kind of prediction. Stupid fucking whore.

Colleen took the garbage bag down the front steps. It was as she was putting the bag into the can, placing its plastic cover firmly in place, that she noticed the dog. It was big and black and looked like a fallen shadow. Its fur glistened in due to the nearby glare of a street lamp.

She recognized that dog. Anyone that lived at 69B Carmichael Street would know that the lump on the ground was Roswell, Rex’s Rotweiller. Colleen wondered why the dog would sleep out here-it rarely left Rex’s side. She approached it and as she walked to the dog, she stepped in something dark and wet. Looking down, Colleen realized that the grass was coated with blood. A river of it poured from the rotweiller’s belly. She followed its trail to the dog itself, its tongue sticking out in a final arc of flesh, its eyes glassy and vacant.

Had Colleen not stopped to pet the dog, she might be alive. This would be her first thought as the man slid the knife into her stomach-but it would be too late by then. She ran her hand along Roswell’s well brushed coat and her heart bled slightly for the dog and for Rex. It was as she was turning, taking in the name of her building (The Charleston) that the shadow moved-it stepped away from the wall, a long silhouette of a man. “Got any change bitch?” He said.

Stepping forward, he slammed a knife into her stomach. Oddly, there was no pain, not right away. It was as the man started moving the knife out of her that it hurt. He pulled it out in a wet arc and sliced at her face. The blade was hot on her skin and she knew there was blood, she could smell its coppery scent.

“Ladies shouldn’t use such language. Are you a lady, Colleen?”

The sound of her name brought her world into focus again, despite the blood. “How do you know my name?” She asked. “Who the fuck are you?”

“Why aren’t you running?” He asked her. He sounded exasperated, though she couldn’t be sure; she couldn’t see anything of his features. It was as if he were blank.  “You’re almost begging me to do it.”

“This.” He slashed out again with the blade. As it sliced through her neck, it made a wet, ringing sound. Blood began to pool from her jugular. Colleen sunk to the ground, the wound in her stomach opening further. She put one hand to her stomach and one to her neck, trying in vain to stop the flow of her life. The blood ran through her fingers, soaking her clothes.

As he began slashing at her body, her voice unable to make a sound of help, Colleen began thinking. She knew that she had limited time in which to think of good things-this is what happens when you die. However, Colleen was dealt a blow when he plunged the knife into her chest, puncturing her heart. The shadow pulled out the knife in a third, graceful half moon.

Those seven seconds, though they were Colleen’s last, were the longest in her short life.